It happened to fall on Thanksgiving! And TEOG (a national placement test for 8th graders),  so I had a short holiday Wednesday and Thursday.

Typically students give gifts to their teachers as a thank you for all they do.  Sometimes it’s just flowers, and sometimes it’s some niiiiiice stuff.  One teacher got a tea cup set from English Home! Dang!

Of course I got a whole lot of nothing.  Not even a flower! Since parents don’t get to meet the native teachers we don’t really count… İ cant lie,  I was a bit sad when everyone else was being lavished with gifts while I sat in the teachers room all by my lonesome.

Since we don’t celebrate teachers day in the US it shouldn’t make me sad.  But what can I do?

At least the school gave us gift boxes!
We also were treated to a night out at a fancy hotel on Tuesday.  Service took us from the school in the evening and we enjoyed a social evening of dancing, eating, and (for everyone else) drinking! 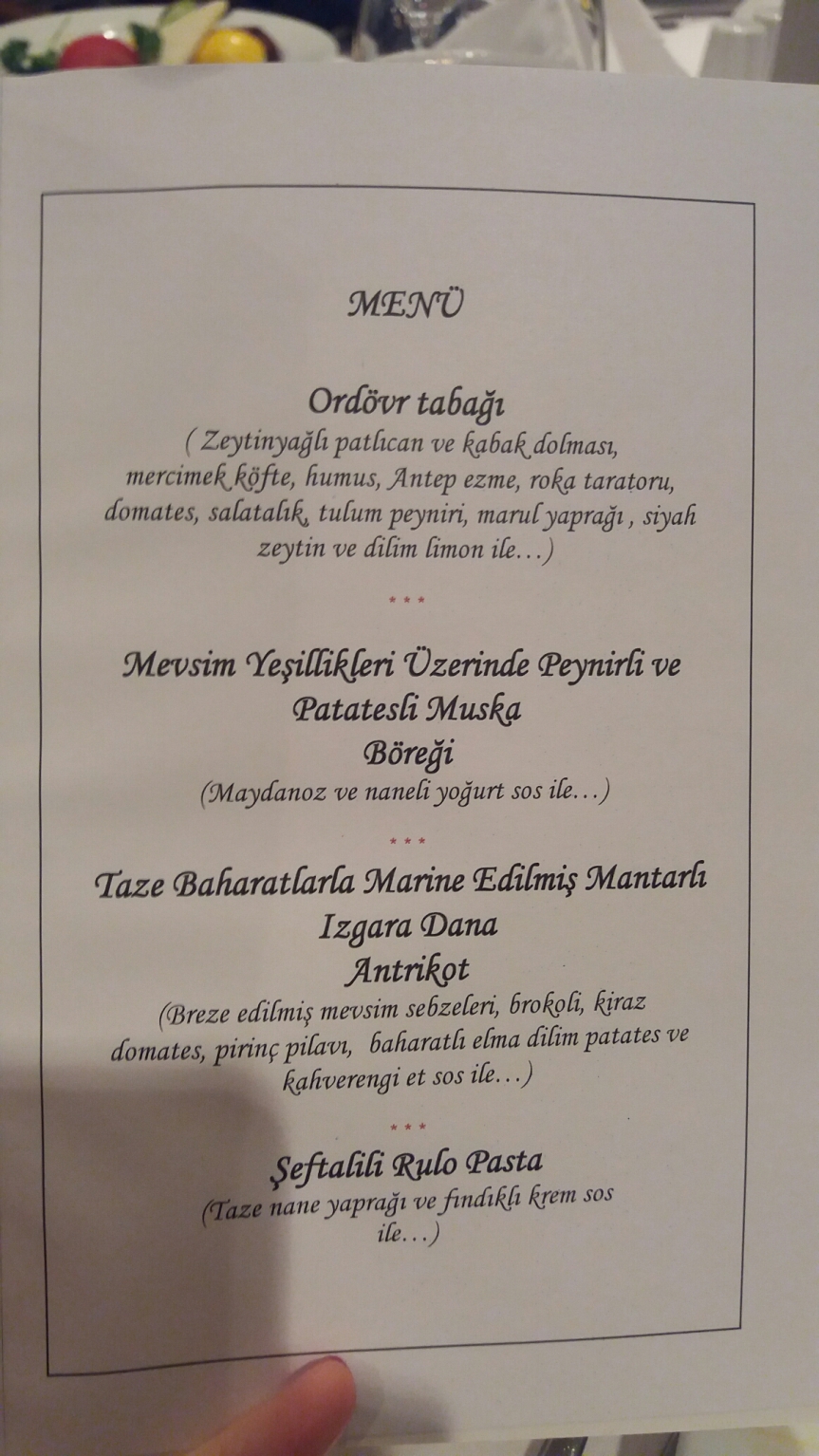 I was sick but tried to make the most of it.

But in all honesty, I was in it for the sales! Every shop had a special teachers day campaign. I got new shoes and replaced some of my makeup that I was scrapping the bottom of the bottle for. 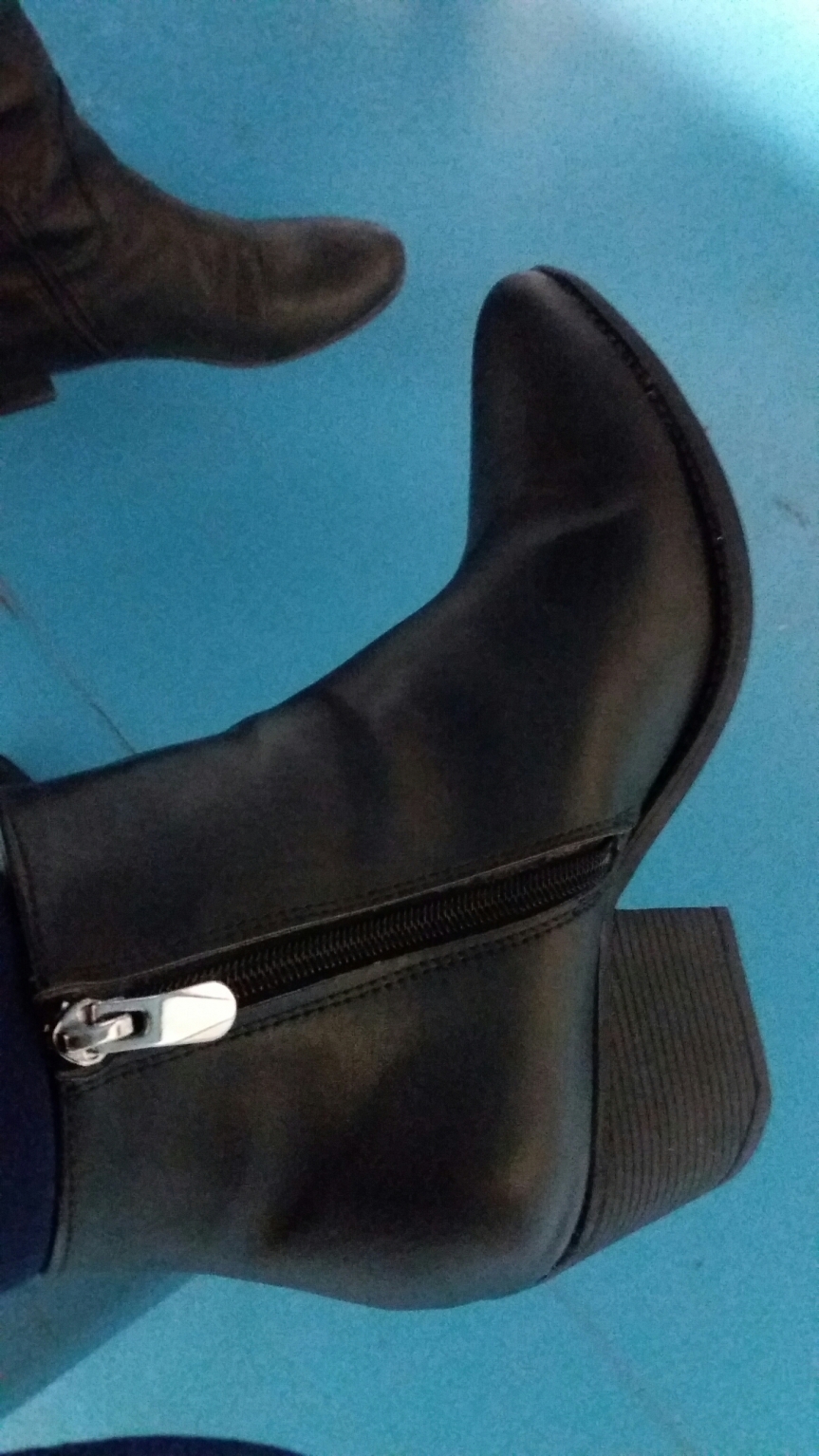 But no matter what, Thanksgiving was on my mind. We again couldn’t do anything because of our living situation… And it’s making me homesick.

I have been exceedingly blessed with a different kind of mom.  The kind of mom that had to put on the Dad pants when my father passed when I was one year old and she was pregnant with my brother.  She never taught me how to do my hair, match my shoes to my outfit, or how to flirt with boys.  But she did teach me how to mow the lawn, kick an assailant where it hurts, and how to get by without a man. She did a nearly impossible task,  raising me and my hellian brother on her own… And we both turned out pretty ok.

Of course,  my maternal grandmother picked up on the girly slack.  And she deserves a shout out for that.  I may have never learned how to keep my mouth shut the like she tried to teach me… But I did learn many other skills from her.  She is where I took my knack for art from, too!

Now I have a mother in law to enjoy and appreciate. Sure, she gets on my nerves plenty, but she doesn’t mean to. She’s been willing to help me learn the day-to-day things most people know at my age, but I don’t (because, you know, I just got here…and things are different!).

So I am very blessed to be surrounded by positive female role models… Which is great and everything… But, I kind of want to be one too.

Mother’s Day can be a mixed bag for those of us who want to be one (a mother) but aren’t. It can be particularly difficult for those whose abstinence from motherhood is not by choice. Fortunately, I’m not one of those who are forced to be childless by physical/biological reasons outside of my control. I guess my not being a mother is by choice, but due to unfavorable circumstances.

When we came to Turkey, we didn’t think our lives would be the way they are right now. My husband thought he would be working. We thought we would have a house/ be somewhat settled down. Hell, I even thought I’d be pregnant by now. It seems sometimes like everyone else thought that too. But while my friends (who are first/second time mom’s, or maybe newly pregnant) drink the kool-aid and offer some to me, I can’t really tell them why I won’t drink it. These problems are ours and kind of private (again, don’t worry, not relationship problems. Life problems), so only a handful of people even know about them.

I know I should be grateful that my self-imposed childless-ness is self imposed…but I can’t help but feel a twinge of regret when the mother’s day pictures start rolling through my Facebook feed featuring my friends (who are majority younger than me) with their kids celebrating mother’s day.

This past Thursday was my first Thanksgiving ( Turkey Day) in Turkey.

However, there was no turkey.  This is the first year that we didn’t have at least a piece on Thanksgiving, and this is the second Thanksgiving I didn’t spend with family (the first being my first year in Florida).

Still, I was able to skype with my family before they had their turkey meal.

That’s what it’s all really about though, isn’t it?  Family, friends, and being thankful for what you have.  Hubby and I decided to start some of our own Turkish/American Thanksgiving traditions!

But turkey will be making a comeback, if I have anything to say about it!

*btw, I apologize these aren’t as detailed as my usual posts, I was in a rush to get them up before it was way past Thanksgiving. Thanks for your understanding 🙂 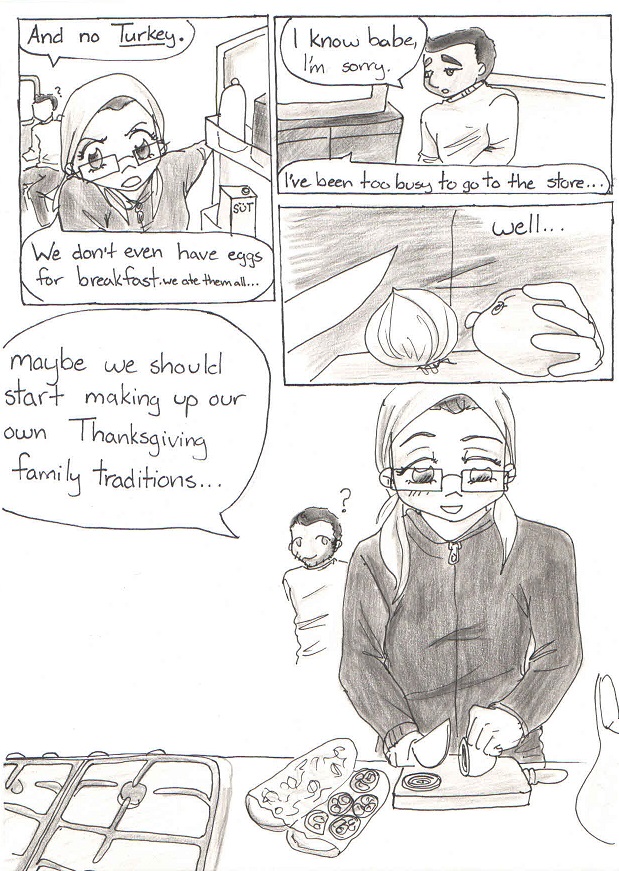 Today has always been difficult for me growing up.  My father passed away when I was one year old, and I never knew him.  Whenever fathers’ day would come around I would celebrate with my grandfather, who has always been the male role model in my life.  Still, it isn’t the same.

But now I do have a father.  Well, a father-in-law that is.  But I know that to him there is no difference between the marriage and blood tie.  We are family.

Happy Fathers’ Day to all the dads out there, and to my babacigim (dear father). 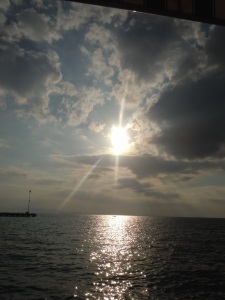 Yesterday we took a day trip to the beach, and it happened to be US Maritime Day…how appropriate! 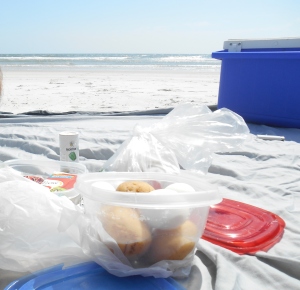 The water was still too cold for swimming, but we did wade around up to our calves.  Most of the time was spent lounging under the umbrella on the shore.  The temperature was a comfortable mid 80s, with clear blue skies. A great day for a drive and a siesta in the shade!  The sound of the ocean is so relaxing!

As is the norm for any of our beach visits- I got plenty of looks for my curious bathing attire.  Yes everyone, I cover most of myself- but is that a bad thing? I don’t have to worry too much about sun exposure, I stay cooler (especially after getting in the water, the suit stays wet and the breeze keeps me very cool), sand doesn’t end up in naughty places…why isn’t everyone donning a full body get-up?  And no, it doesn’t hinder my ability to swim at all; it feels just as light as wearing nothing! 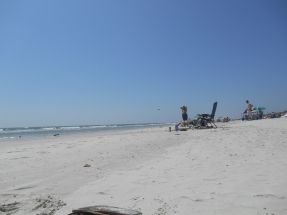 I won’t lie, this wasn’t the most beautiful beach I’ve been to- but I do love the sand of Floridian beaches.  The view at the beaches in Izmir were outstanding- but the ground was  much more rocky .  The same goes for South Carolina, where the beaches have more pebbles than sugary white sand.  However, any beach in the US will trump Turkey in one category- public bathrooms.  In the US they are free.

Hopefully we will be going back to our favorite beach before we leave the state (pictured below). 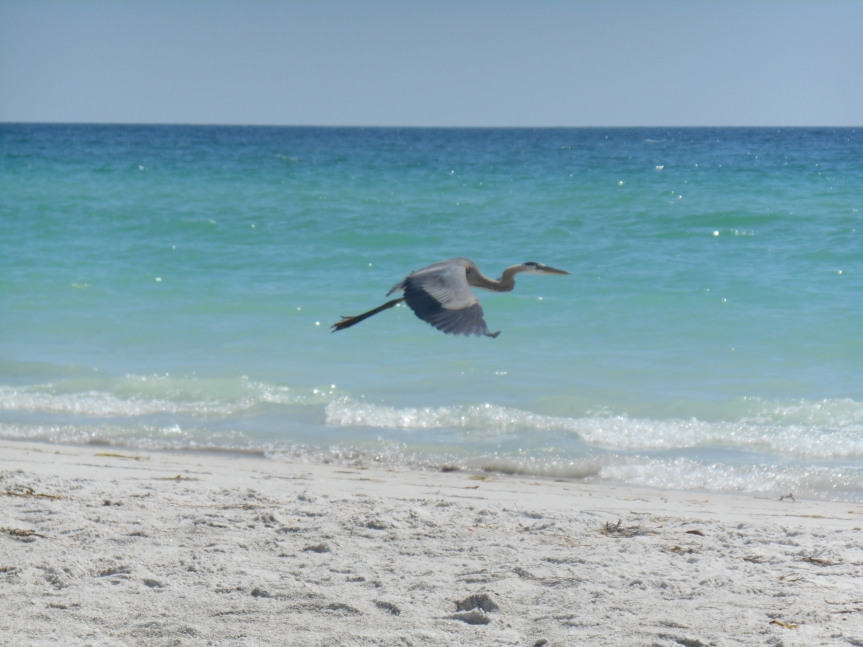 I have been neglecting my blog as of late, but I don’t think anyone truely minds, since I am the only one who looks at it…

Anyway,  this term I have been teaching the food microbiology lab with three lovely ladies.  We have only officially taught one lab so far, but I think I like it!  As much as a claim to dislike people,  I like to answer questions and explain things to people who don’t understand.  I even threw some doodles on the white board to help explain how to conduct the experiment…I think it helped!  Smart mouths and slack are still irritating to me, but you know what?  Its not my grade! HAH!

In regards to the future… My husband has been expressing his concerns about returning to Turkey.  The University he signed up under (the one in which he will teach when we return) is not exactly his first choice these days.  Actually, its pretty close to his last (not including those in a region he doesn’t want to travel to).  I tell him all he can do is his best, and if it is nasip (fate) he won’t have to teach there.  I am doing my best to obtain good grades, have good experiences, and prepare myself for a potential job in industry there.  We are hoping (insallah) that if I get a job in the city his family is from that will influence his options for placement when he returns (apparently that’s a thing in Turkey?).  All we can do is wait and see. Hayirlisi olsun.

Lastly, WORLD HIJAB DAY is on Feb 1! I encourage muslims and non-muslims alike to don the hijab for a day as a sign of solidarity with our hijabi sisters.  The hijab has been banned in a few countries, which is explicitely against human rights!  Let’s remind everyone that the right to wear a scarf on ones head belongs to everyone, regardless of race, religion, or country!  Check out the movement at worldhijabday.com or on facebook!

A Real Girls Guide To Life

life is not a bed of roses.

Going Groundless
One step/(mom)ent at a time

Navigating the world of stepmama-hood and life, one step, one moment, at a time

Beyond an HDB flat

four camels and a coffee to go